A Motion to Consider: New Evidence for the Value of Animation in Visual Analysis

By Brian Ondov and Niklas Elmqvist 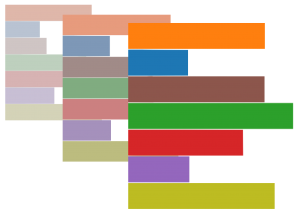 Animation in data visualization has been through it all, from initial hype, to explosion of applications, to skepticism and debunking. If nothing else, though, the topic of animation is persistent, perennially asserting its presence both in design and in the scientific community. In fact, a landmark study casting doubt on the efficacy of animation will receive a 10-year Test of Time award at the upcoming IEEE VIS conference, emphasizing the enduring relevance of this mechanism, even in the face of negative results.

Motion seems speaks to us at a fundamental level, perhaps because it is among the most primitive and fundamental elements of vision. Perception of motion originates in the retina itself, and even motion that is outside our visual field can trigger an innate response to look toward it. But can animation have perceptual value beyond just catching our attention?

As is often the case in science, we stumbled upon an interesting result almost by accident. Our intent was to investigate the usefulness of different layouts to support comparison, with an especially curious eye toward symmetric arrangements, such as population pyramids. For the sake of completeness, we threw in animation as a bit of a wild card. To our surprise, in our first experiment, animation won the day, enabling participants to perform the task better even than with superimposed displays (which were intended as a control!).

So what is going on here? Are these results incongruent with other experiments? Not necessarily. While it is tempting to use perceptual studies to label visual techniques as “good” or “bad”, the reality is of course more complicated. For example, our setup involved only a small number of moving shapes, and required the ranking of very subtle differences between data points. Both of these factors likely made it easier to track and compare elements of the scene. We think this allowed participants to bring a powerful perceptual ability to bear: the estimation of how fast an object is moving.

What does this mean going forward? Well, for one, our study was highly controlled and narrowly focused, and there is plenty more to be done to explore all the factors that may be at play. More broadly, though, we may benefit simply from adopting a more nuanced view the value of animation for conveying information. One thing that is clear is the continued importance of answering these questions as the field progresses. Whether it’s used to enhance cognition or just for splash, animation probably isn’t going anywhere.

More information about this work:

For video and demos, visit: //visualcomparison/

To learn more about the HCIL, please visit: //