Praise for Shneiderman’s ABCs of Research

Ben Shneiderman’s The New ABCs of Research has been getting great advance press . 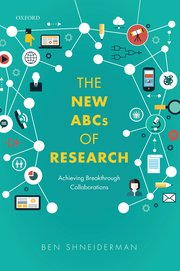 In a review in the journal Nature, Rick Rylance writes favorably about Shneiderman’s new book, praising “the boldness of its ambition and the promise of its ideas”. The book has also received some glowing endorsements: Donald Norman, Director of the Design Lab at UC San Diego, calls the work “powerful and important,” while Rita Colwell, former Director of the National Science Foundation, considers it “a critically important research manifesto.”

In The New ABCs of Research, Shneiderman explores the role of collaboration in research, and lays out guidelines for successful collaborative work. By exploring the roles science, engineering, and design each play, Shneiderman provides a more complete, interdisciplinary picture of the research process. Shneiderman’s argument is supplemented with case studies that present detailed examples of new research strategies in action. More information about the book, including an introductory video and table of contents, is available here.

Ben Shneiderman is a Distinguished University Professor in the Department of Computer Science and the Founding Director of the Human-Computer Interaction Lab. Among his many honors, Shneiderman is a Fellow of the Association for Computing (ACM), the American Association for the Advancement of Science (AAAS), and the National Academy of Inventors (NAI). He is a recipient of the ACM SIGCHI Lifetime Achievement Award.

The New ABCs of Research, published by Oxford University Press, will launch April 4th. It is currently available for pre-order.