A second Copernican Revolution puts humans at the center of attention.

Artificial Intelligence (AI) dreams and nightmares, represented in popular culture through books, games, and movies, evoke images of startling advances as well as terrifying possibilities. In both cases, people are no longer in charge; the machines rule.  However, there is a third possibility; an alternative future filled with computing devices that dramatically amplify human abilities, empowering people and ensuring human control. This compelling prospect, called Human-Centered AI (HCAI), enables people to see, think, create, and act in extraordinary ways, by combining potent user experiences with embedded AI support services that users want.

The HCAI framework, presented in four papers, bridges the gap between ethics and practice with specific recommendations for making successful technologies that augment, amplify, empower, and enhance humans rather than replace them. This shift in thinking could lead to a safer, more understandable, and more manageable future. An HCAI approach will reduce the prospects for out-of-control technologies, calm fears of robot-driven unemployment, and diminish the threats to privacy and security. A human-centered future will also support human values, respect human dignity, and raise appreciation for the human capacities that bring creative discoveries and inventions.

Audience and goals: This fresh vision is meant as a guide for researchers, educators, designers, programmers, managers, and policy makers in shifting toward language, imagery, and ideas that advance a human-centered approach. Putting people at the center will lead to the creation of powerful tools, convenient appliances, and well-designed products and traditional services that empower people, build their self-efficacy, clarify their responsibility, and support their creativity.

A Second Copernican Revolution: Reframing old beliefs with a fresh vision is among the most powerful tools for change. Ancient astronomers saw the earth at the center of the solar system with the sun and planets revolving around it. In the 16th century, Copernicus reframed astronomy with a sun-centered model, which was more accurate, thus enabling further discoveries. Similarly, HCAI reframes AI by putting humans at the center.

Traditional discussions suggest that humans are “in-the-loop” around AI, while the HCAI reframing suggests that AI is “in-the loop” around humans, who are now the center of attention. Some may see this analogy as exaggerating the importance of and the differences between AI and HCAI, but it is meant to have readers stop and think about these issues. I believe that the role we give future technologies will shape the lives we live and the image we have about human dignity and destiny.

The reframing to HCAI has deep implications. In the past, researchers and developers focused on building AI algorithms and systems, stressing machine autonomy, measuring algorithm performance, and celebrating what AI systems could do.  In contrast, HCAI’s design thinking approach puts the human users at the center, emphasizing user experience design, measuring human performance, and celebrating the new powers that people have. Researchers and developers for HCAI systems focus on user needs, explainable systems, and meaningful human control. People come first; serving human needs is the goal.

Putting humans at the center of design thinking does not mean that designers should mimic human form and behavior. The alternative is to serve human needs by way of comprehensible, predictable, and controllable tools, appliances, and user experiences. 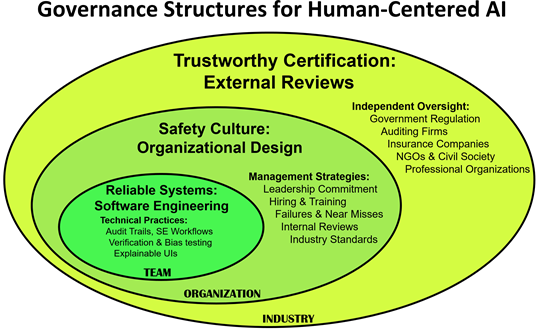 Trustworthy certification by industry, though subject to government interventions and regulation, can be done in ways that increase innovation.  However, other methods to increase trustworthiness are for accounting firms to conduct independent audits, insurance companies to compensate for failures, non-governmental and civil society organizations to advance design principles, and professional organizations to develop voluntary standards and prudent policies.